How the weather is predicted is such a fascinating topic. Not only is it interesting to find out how the weather is forecast, but it is also a great way of planning what you are going to do with your week.

A fun way to forecast the weather is with a storm glass. If you have never heard of a storm glass or if you have always wondered how one works then look no further!

In this article, we will be discussing everything you need to know about a storm glass. We will be going into detail about what a storm glass is and how it works to forecast the weather. We have also included some great storm glasses you can purchase if you are interested in using one yourself.

We hope this article will blow you away! 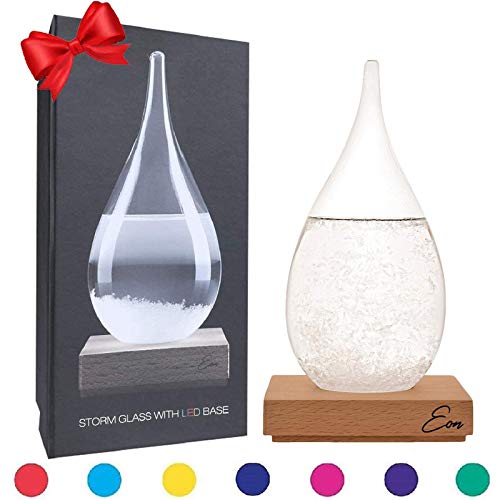 What Is A Storm Glass?

A storm glass you may have seen being referred to as a camphor glass or a weather glass. It is a meteorological instrument shaped like a glass tube that was used in history to help predict the weather.

It is usually filled with a mixture of alcohol, potassium nitrate, ammonium chloride, camphor, and water. When all of these components are mixed they form types of white crystals. These crystals can grow and shrink in size over time. Some of the crystals that are formed look quite feathery and not too dissimilar to snowflakes. This mixture can also turn cloudy.

In terms of its origin, this is not known exactly. It has not been pinpointed if there was one person in particular that came up with the idea of the storm glass. However, it is thought to have been first noted to have been used in the late 18th Century.

It is not known how or why the creator of the storm glass came up with the idea, but they did quickly rise in popularity. In the 19th Century, Admiral Robert Fitzroy, a British Naval Officer, decided to use a storm glass on the HMS Beagle. It was this ship that Charles Darwin used when he began his research into evolution.

While Fitzroy did not create this device, this is why it is often linked back to him and referred to as the Admiral Fitzroy Storm Glass. After he used it on this expedition, it grew in its popularity significantly.

Barometers that are typically more accurate at predicting the weather were not as easily accessible during this time and they were expensive. Given that storm glasses were inexpensive in comparison, they became the weather instrument to buy. 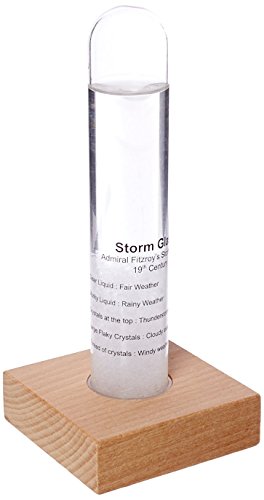 How Does A Storm Glass Work To Forecast Weather?

It is worth noting that how the crystals are formed inside the storm glass and why they change shape is still not fully understood. When storm glasses were initially used commonly in the 19th Century, they were not sealed fully, only with a rubber cap. This may have had some effect on how the solution inside the storm glass reacted to the air and temperature changes.

However, the storm glasses that we are more familiar with today are completely sealed, partly due to the chemicals that are used. This would suggest that it is the temperature changes that occur outside of the storm glass that affect the forming of the crystals.

There have been studies and research carried out to determine how a storm glass works. These studies have linked the changes in the crystals forming to the overall temperature, rather than the weather itself.

In the time of Fitzroy, it was thought that the more crystals and fogginess that was displayed in the storm glass meant that a pattern would form, which you could use to determine what the weather would be like. While a storm glass was seen to be one of the best ways to predict the weather in the 19th Century, it is not so much the case nowadays.

Here is a rough guide of how Fitzroy thought that the storm glass predicted the weather:

This is what was believed that a storm glass could predict. The more that the accuracy of the storm glass was tested, the more scientists found flaws in the system.

The scientists struggled to see a pattern and accuracy in how it predicted the weather. In addition to this, the scientists were unsure of what each type of crystallization represented in terms of the weather. 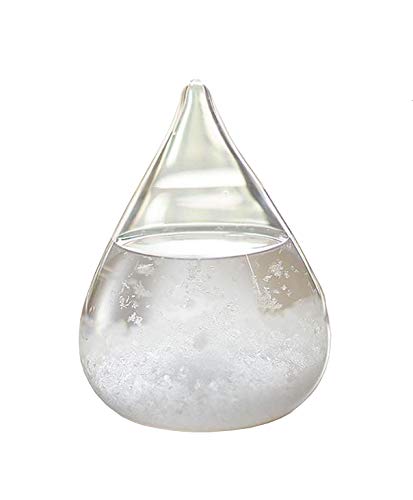 Is A Storm Glass Reliable?

As you can see from above, while Fitzroy trusted and believed in the storm glass, the same cannot be said for the majority of scientists. As studies have shown, it is likely the storm glass reacts to heat, rather than pressure or weather change.

It is thought to be around 50% accurate, but more research is needed to determine why the contents of the storm glass react in the way that it does.

Summary And Where To Purchase

We hope that you found this article interesting. As you can see, storm glasses are fascinating contraptions. While they may not be as reliable as looking at your phone’s weather app, you cannot deny how interesting they are!

If you are interested in purchasing a storm glass see how it works for yourself, here are some great options that are available via Amazon US:

About the Author Marvin J. Snyder

I'm the research analyzer and data interpretation here at Weather Station Lab. I test various weather stations and share my conclusion here. Since my childhood, I had a passion towards weather and I'm always fascinated by that. Eventually, I pursued Ph.D. in Atmospheric Science from the University of Arizona. I hope my contribution will help you to know more about weather stations. Read more about us, here